Thanks to my Facebook friends for suggesting the highlighted words. I wanted to write the story in Regency-era so I had to check that liver pudding, Clarinet and Sir Newton were all "available" then. I had a wonderful time reading about them. The following story is longer than a drabble, but it includes all the words. Happy Reading! It's unbeta'd.

Darcy reined in the horse by the lake. The midday sun made the already scorching day unbearable. He jumped from the horse and decided to cool himself in the pond. Pulling the cravat loose, he dived into the lake, disturbing the peaceful and tranquil water. The cooling water was refreshing. He swam for almost half an hour until an apparition parted the tall grass by the pond and disturbed his relaxation. 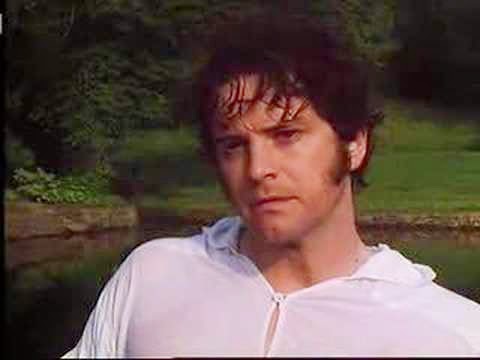 “Elizabeth…” He uttered her name breathlessly. In a pure white day dress and with ribbons fringing the straw hat, Elizabeth emerged through the woods like a fairy. He was fascinated by her appearance, with some unruly curls framing her smiling face which was brightened by the exercise.
“Mr. Darcy, I thought you would be here.”
“How could you possibly have guessed?”
“I can sketch your character quite easily.” She then curtsied and beckoned him to follow her, with a secretive smile. “if you please, sir.”
Darcy’s heart raced. He immediately swam to the shallow end of the pond, climbed up to chase after Elizabeth who had started to run into the woods. He hurried along without care to his dripping wet body.
By the time he caught up with Elizabeth, she was sitting on a blanket on the grass. The mysterious tunes of Mozart flew through the Clarinet she was playing, adding a sense of suspense and disbelief to the surrounding.
Darcy lowered himself to occupy a corner of the blanket, stretching his long legs, with his head on his hand, staring sideways at Elizabeth intensely. As the mystic sounds took a more comic turn, she crooked her head to motion him to look around. He finally saw a basket on the blanket.
He raised and had a quick look. The basket was full of sumptuous food. How very thoughtful of her, he smiled. After the long ride and the energetic swim, Darcy did felt hungry. Quietly, he bit into a small liver pudding, the rich, juicy taste filled his stomach. As he enjoyed the refreshing flesh of peach and a glass of tea with ice, Elizabeth started singing a most seductive aria.
Suddenly Darcy had a hunger of a different kind. Not satisfied with only admiring Elizabeth’s creamy chest that rose and fell with the rhythm of the song, he left the gourmet food aside and moved near her silently.
The closer he leaned to her, the shakier was her voice. Her eyes however never broke contact with his. She continued to sing, stirring up his desire. As he caressed her neck with his fingers, her pitch raised slightly. When his fingers slid down the creamy mounds to her breasts, she gasped and missed a beat. Her nipples peaked, clearly visual through the fabric of her dress. She stopped singing mid-sentence, as he grabbed the twin peaks.
“Welcome…home, my dear…husband!” Elizabeth uttered the words breathlessly, before pressing a hot kiss on Darcy’s mouth.
The woods were now silent except for the sounds of birds and Darcy and Elizabeth’s panting.
“I would not mind going to London on business if that is the way every time I am welcome home.”
Elizabeth tore off Darcy’s wet shirt quickly, without bothering to reply. When her hands frantically rub over his back, he pulled up her hem and settled between the comfort of her legs. He bestowed hot kisses on her shoulders, brushing away the dress to expose her creamy mounds. Her fingers became more urgent as she undid the buttons on his breeches.
Soon, she freed his proud manhood from the constraint of the trousers and palmed it. Panting hard, Darcy shifted to poise at her wet entrance.
“My love,” he whispered.
“I miss you,” she replied.
Darcy gazed at Elizabeth's eyes and thrust his hard shaft into her core. Her welcoming heat and tightness embraced his body. He let the pant up passion of the past two weeks to run wild. Like an untamed stallion, he galloped in full speed, empowering intensity and dazed abandons, until Elizabeth screamed out in ecstasy as she reached her peak. He then thrust more deeply into her for a few more times, before he trembled and convulsed for his own climax.
The woods turned silence again. Even the birds had stopped singing. Darcy rolled away from Elizabeth and looked up at the sky. Being home was good. Even the sky at Pemberley looked friendlier than London. The trees looked greener and better too.
Pop!
Darcy made a sound of burp as an apple dropped from the tree and hit his stomach.
“Oops, the trees are not friendlier than those in London!” he exclaimed as he rubbed his abdomen. Luckily it was not a large apple, and he was not seriously hurt.
Elizabeth emerged from the haze of lovemaking and burst out laughing on seeing her husband’s petulant expression. “Ah, fate gives you a comeuppance for your neglect in sending me a love letter every day during your absence!”
“Nonsense, the dropping of the apple is entirely natural, according to our former Cambridge scholar, Sir Newton. This is called the theory of gravity.”
Elizabeth raised her eyebrows at him. “I did not know that you are a man of science, Mr. Darcy.”
“I am indeed very interested in science, in particular, the biology of my wife’s body!” With that, he spent the entire afternoon in the woods exploring and examining the lovely being called Elizabeth.