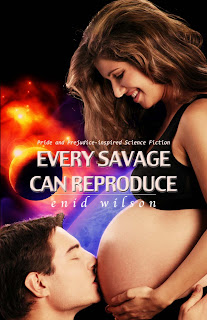 “Children Are Not For Everyone”
– the Genesis Department, 3818


The tall, blond man wore a dark blue X-bio space suit fitted to his masculine body. He smoothed the fabric over his chest and thighs, then pushed his invitation card into the key slot. The door slid open, and an invigorating fresh scent blossomed around him. He drew in a long, deep breath and entered Love Your Mate’s Capsule UR1.

A red-haired woman turned away from the snake-shape vision pocket and acknowledged his presence, waved at a screen on the wall.

The capsule blasted off immediately.

The couple stood in silence for several minutes, gazing at each other until the horizon outside indicated that they had left Planet Earth.

Taking off her yellow i-techno space suit and the wig, the woman revealed a mass of chocolate brown curly hair under the disguise. Following her, the man took off his wig, showing his dark, wavy hair.

“Thank you for coming, Mr. Darcy,” the woman said.

“My pleasure, Miss Bennet,” Fitzwilliam Darcy replied calmly, though his emotions were in turmoil. He had been stunned to receive a secret message from Elizabeth Bennet, requesting a meeting at one of the most infamous capsules in the Planet. These illegal establishments existed solely as a way for men and women to indulge in prohibited sexual activities, away from the hounding eyes of the Military Intelligence Agency, commonly referred to as the MIA.

Darcy had first met Elizabeth through his best friend, Charles Bingley, six months prior. Since then, he had been captivated by her compassionate, intelligent and lively character. She was different from any of the women he knew, never fawning over him or praising him to the sky because of his wealth and position. But he had not acted on his desire for her, nor had he asked her out. As one of the closest relatives of the newly selected Queen Immortal, the existing ruler of Planet Earth, he had to be scrupulously careful about those with whom he associated.

He had a lot to consider, especially when it concerned someone below his class. Planet Earth had adopted a rigid class system since the apocalypse that had occurred fifty years earlier. Darcy’s mother came from the Noble class, the second most important social stratum in the Planet. His father came from the Gentry class, one level below. Elizabeth’s family, however, left a great deal to be desired. She was the second-eldest daughter of five. Although Mr. Bennet came from the same class as Darcy’s father, Elizabeth’s mother came from the Merchant class, yet another level below. Darcy had also witnessed the unruly behaviour of her younger sisters, which made him hesitant to associate with most of her family.

But the illicit nature of this rendezvous and the promise of enjoying hours of this alluring woman about whom he had fantasized for months had prompted his decision to come for today’s meeting. For once, he was willing to forget his position in society, and seize the moment.

“Won’t you have a seat?” Elizabeth said. The capsule was lit with a dim, soothing green light. A vast bed occupied one side, and a loveseat with a coffee table another. There was a glass door, leading to a luxuriously furnished bathroom. One could recline on the bed and watch as the other person took a shower or bath, as the partition and bathtub were made of cloudless steel, a transparent material.

But Darcy was not interested in any of those. He had come purely for her.

Taking a few slow steps, he chose to sit on the loveseat.

She did not come to sit by him but remained standing near the bed.

“I have a proposal for you,” Elizabeth said.

Darcy raised his eyebrows and waited for her to continue.

“I want to have your baby.”